***This is a brand new London, England-based Book and Music Review section.***

A Review of Between the Walls

"A Canuck with a little bang for your buck." 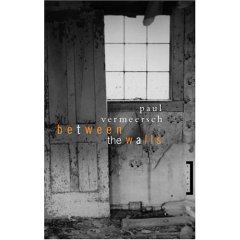 Canadian, Paul Vermeersch's third book of poetry, Between the Walls, is a departure from his rural-themed début Burn (ECW Press, Toronto, 2000) and his eating disorder, body-image obsessed second effort, The Fat Kid (ECW Press, Toronto, 2002). This time, Vermeersch has moved on from the land and body and has ventured into the battered and disenchanted field of the mind. Using Toronto`s back alley critters as focal point, each set-upon beast is confronted with misfortunes and challenges as it attempts to exist in the concrete and cluttered city scape, Toronto.

Animals, long ago ruled over by humans, are portrayed as caged vermin, shut into cracks and cornered in back alleyways, seeming to implode. But do deer and rabbits live in Vermeersches city or memory? And whom is in control, the home owner who 'gingerly' mows around a rabbit warren or a deer who bites the authors arm, forming 'a claret red bruise '? Even the birds are not free to fly, here.

'Birds are grasped in the palm,/
little wicker hand grenades/
with feathers to muffle the blast -

Given the penchant for melancholia, there are occasional mention of pills and of being 'kite high'.

'Twenty mils paroxetine HCI. Two weeks in mania;
this is the free ride, bad case
of the giggles on the doctors' samples'

Fickle friendships are laid bare as well. In The Mission House Vermeersch remarks, 'I felt old friendships like noiseless deer receding into various alpine landscapes.' Equally dreamlike and cautionary these are little flits of reckoning from a young, at times optimistic, oracle.

Boys 'wolf whistle', fed-up go girls 'honey boot' amidst tainted sofa sex; this is no sentimental journey through childhood pleasures: In a grandparents barn a tom cat lazes away from his mate, his 'thorn bearing-penis' having no power to save unwelcome litters from their watery graves.

Bleak, like the Booker-nominated Oryx and Crake, this is a Canuck with a little bang for your
buck.